Sadly last week we lost one of our former AUS and SA rowers – Joel Mayne. He died on Wednesday 27 April at his home in South Australia.

Please see some career details for Joel below, plus a photo of the AUS Junior Mens Coxed 4.

Rowing Australia is working with Andrew Guerin on a tribute that will be posted on the RA website.

We send our heartfelt condolences to Joel’s family and friends. 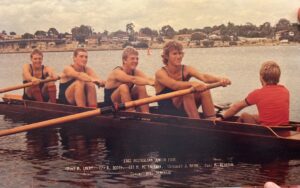