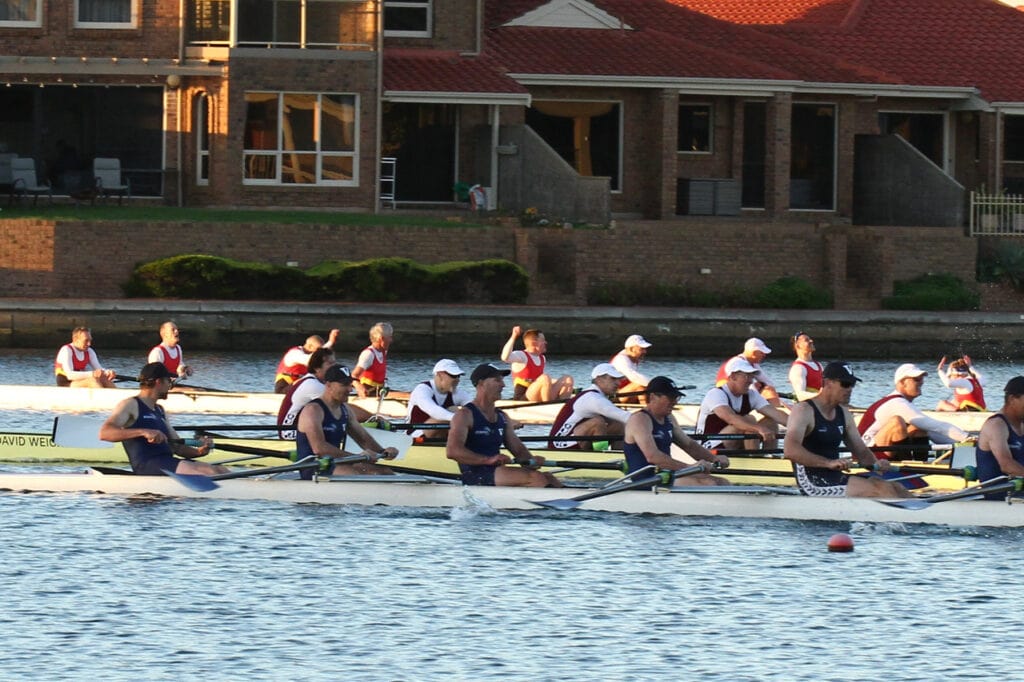 The South Australian Masters Men’s Eight celebrate their first ever win in the event as they cross the finish line first. Copyright Rowing SA/With thanks to Ann Koch

South Australia won the Australian Interstate Masters Men’s Eights race for the first time in front of the home crowd on Saturday evening, with a stunning display of blistering pace which saw them lead from the start and row away from the field to a historic victory.

The winning crew was stroked by 2021 Kings Cup rower Ross Hamilton who averaged 39-40 strokes per minute over the 1000m course. Hamilton said he remembers little of the race save for coxswain Bonnie White urging him on. “Bonnie was incredible! I had no idea where we were in the field when we got out of the blocks, it was only about 300m in when she called, ‘Yeah boys – that was an amazing start’ I thought – right, we’re on here. From there it was a blur of adrenaline – I didn’t even know where we’d finished until after we crossed the finish line.” 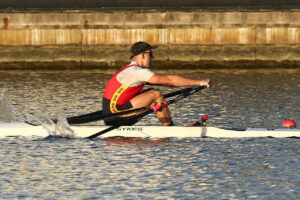 South Australia showed strength in other Interstate categories as Jed Altschwager won the Inaugural Men’s PR3 Single scull title in a blistering time of three minutes 45 seconds. New South Welshman Kevin Wall took the Silver and ACT’s Stuart John took the bronze – a great result for him as it was a personal best time, his first-time racing under five minutes for a 1000m race.

New South Wales showed depth as the only state to boat a full field for the Interstate races, Lisa Greissl won the Inaugural PR3 Women’s Single Scull for her state.

South Australia also scored their best result in any of the Women’s Interstate Masters events when the women’s quad scull, a boat of Jo Malcolm, Symonne Ellis, Susi Ross and Angie Francou that ended up being C grade and therefore needed to give all crews a 3 second handicap, bravely fought their way back through the field to collect silver medals. The Victorian crew proved too strong, streaming out in front from the start and holding their position to retain the trophy and continue their domination in the event. 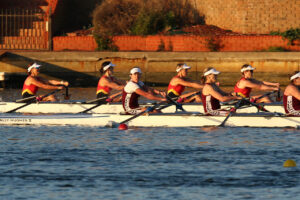 South Australian Masters Women’s Quad rows through the field to take the silver in the interstate event. Copyright Rowing SA/With thanks to Ann Koch

The Queensland women showed their strength sweeping; the Womens Masters Eights were won for the sixth time in a row with a comfortable victory over NSW in silver. Victoria took the bronze while SA were a gallant fourth.

Queensland also won the men’s quad scull in a photo finish from WA with Victoria a close third, just ahead of Tasmania.

The Interstate regatta was a great success with another day of glorious weather; all rowing states and the ACT participated in and medalled in the Interstate races, while the livestream peaked with hundreds of viewers tuned in to join watching the race live over social media. 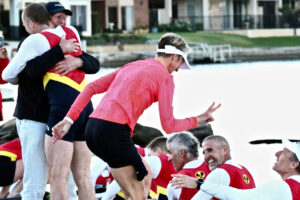 A precious moment between Symonne Ellis (ISW4x) as she congratulates partner Rob (ISM8+) and relays the result for her crew. Copyright Rowing SA/With thanks to Ann Koch

Report on the Masters Interstate Regatta prepared by Phil Mangelsdorf.