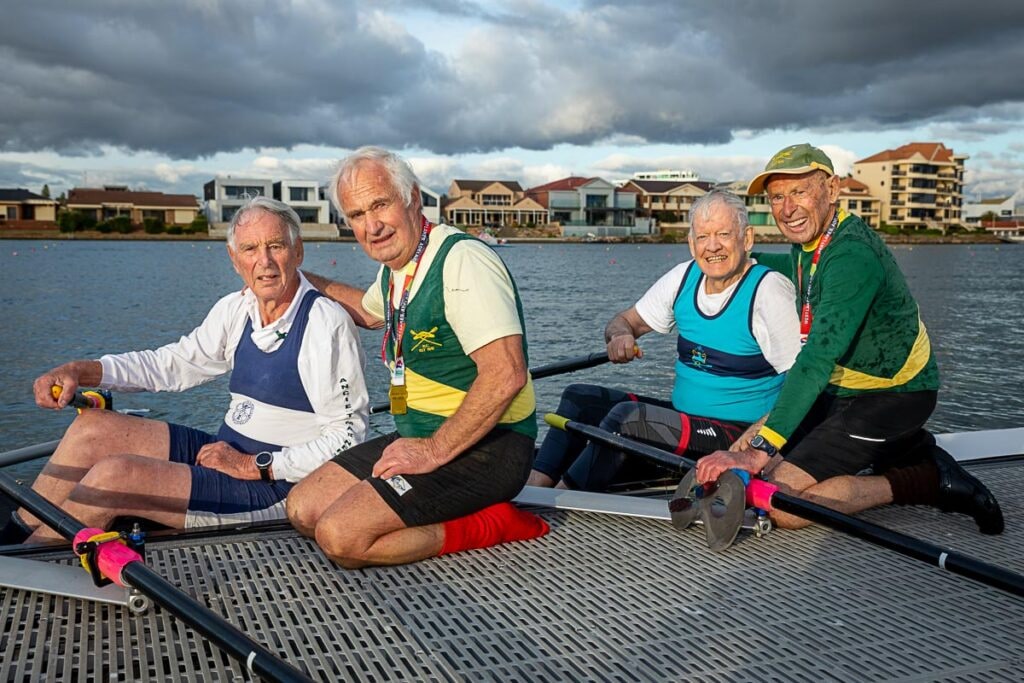 The second day of racing at West Lakes pampered competitors from all Australian states at the 2021 Australian Masters Rowing Championships with clear and fast racing conditions.

NSW clubs came to the fore with the most gold on day two, winning over 20 events; Queensland clubs won 15 titles whilst the Victorians, who have gradually increased their numbers able to race at the regatta due to returning negative Covid tests, showed the strength of their state winning 11 golds across the day. WA and SA each won five golds while the ACT and Tasmanian contingents took two each.

Banks Rowing Club’s Olympians Chris Shinners and James Lowe were cleared of their covid tests after crossing the border earlier this week to race for the first time; the dynamic duo led the Victorian charge with three gold medals in different boat classes.

The oldest men’s age group race today was the over 83 years men’s double sculls which saw the Mannum crew of Max Lindsay and John Banks unfortunately lose control of an oar near the finish but recovered spectacularly to nip over line ahead of Don Gibb [Melbourne RC] and John James from North Shore.

The over 75 years men’s eight race was a battle of the giants; the NSW Drommoyne composite crew won by just 0.05 of a second ahead of the Victorian Banks composite crew with MUBC third.

The women’s over 60 eights saw an ANU and NSW clubs composite crew win by 2 lengths ahead of Melbourne/Yarra Yarra who were only one length ahead of the Sunshine Coast/Toowong boat from Queensland.

The oldest crew to race on the day was again the over 88 years (average age) women from Mannum and Port Adelaide but despite their generous handicap of a 91 seconds head start they were overtaken in the shadows of the finishing post and beaten by nearly a boat length by the MUBC crew of Patsy Montgomery, Pamela Whiting, Josephine Bant and Anne Parbury.

Once again the regatta functioned safely with cheerful co-operation from the competitors and the boat race officials, volunteers and covid health officials.

Day 3 racing resumes at 8.00am Saturday with the highlight feature events of the 4 day regatta, the six Interstate races for men and women in eights, quad sculls and Para single sculls with all Australian states and the ACT represented, scheduled to start at 4.25pm to close out the day’s programme.