Perfect racing water at West Lakes greeted competitors from all Australian states as the first day of the 2021 Australian Masters Rowing Championships got off to a flying start with top class racing in all Master’s age divisions and boat classes.

South Australian clubs made the most of their home town racing with every local club winning medals today, for an impressive total of 10 gold, seven silver and six bronze, in different age groups and boat classes, the best ever single day result by SA clubs at a National Masters regatta.

The women’s C grade double was the highest entered event aside from the mixed races; 22 crews pushed this event into a heat/semi-final/final progression, the only event to do so for the day. each race was hotly contested, with the final being an absolute nail-biter as composite combination of Katrina Davis (Shoalhaven Rowing Club) and Andrea Cooze (St George Rowing Club), coached by Bruce Williams, pipped Melbourne Rowing Club’s Tanja Nishibata and Bernadette Kerr on the line by 0.18 seconds. Commercial Rowing Club’s Christine Taylor and Mary Wex snapped up the bronze.

A highlight of the first mornings racing was the Riverside mens coxed four with an average age of 88 years  as they put up a brave effort against two crews whose average ages were  10 years younger, Riverside only surrendering the lead in the closing stages of their race, won by North Shore. 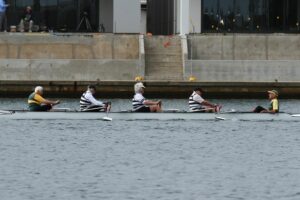 The mixed races are some of the most popular at these regattas and the Adelaide Uni crew of Bill Natt and Jo Malcolm won the double scull in their division, joined in their age group by gold medal Port Adelaide crew Symonne Ellis and Damien Derlique.

The men’s and women’s Champion Club Eights were the feature races of the day and were dominated by Queensland crews with the Commercial Club winning the John Whiting Women’s trophy and Toowong taking back the Men’s John Whiting Trophy from Melbourne University Boat Club, the trophies named after the late Australian Master Rowing Champion and presented by wife, Pamela.

The Toowong Rowing Club was one of the most successful clubs for the day’s racing, leading the medal tally board with Port Adelaide Rowing Club not far behind.

Covid lock out caused several Victorian crews to scratch from their events but the regatta functioned safely with great co operation from the competitors and the boat race officials, volunteers and health officials.