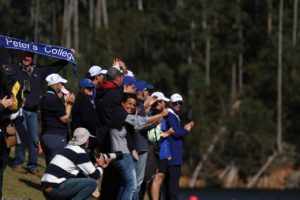 Sunday was a jam-packed day full of finals at the 2021 AON Australian Rowing Championships. The morning saw the minor finals of the school events, of which the following results were:

In a turn of symbiotic fate, Ella raced under the Mannum banner this week for the school event, even though the country sculler has moved her competitive club rights to the youth-strong Torrens Rowing Club. This year celebrates the Centenary of the Queens Cup, then awarded to coxed fours, which was originally won by a crew from Mannum. The cup itself is styled on Bertha, as the trophy is affectionately known, who was a rower in the original Mannum crew. 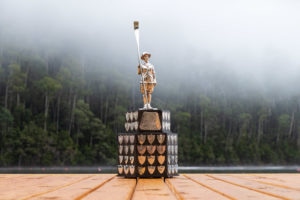 We then headed into finals, where medals were up for grabs, and our SA crews did not disappoint! There was a bit of SA club rivalry on the course as the Club Women’s Four drew side-by-side lanes for Adelaide Rowing Club (ARC) and Adelaide University Boat Club (AUBC); both crews jumped out searching for a podium finish, but it was the ARC-strong crew full of Queens Cup members Sophia Nery, Mieka Webb, Erica Webb and Christie Shanahan who secured the bronze while the AUBC crew put in a gutsy effort to come fifth. 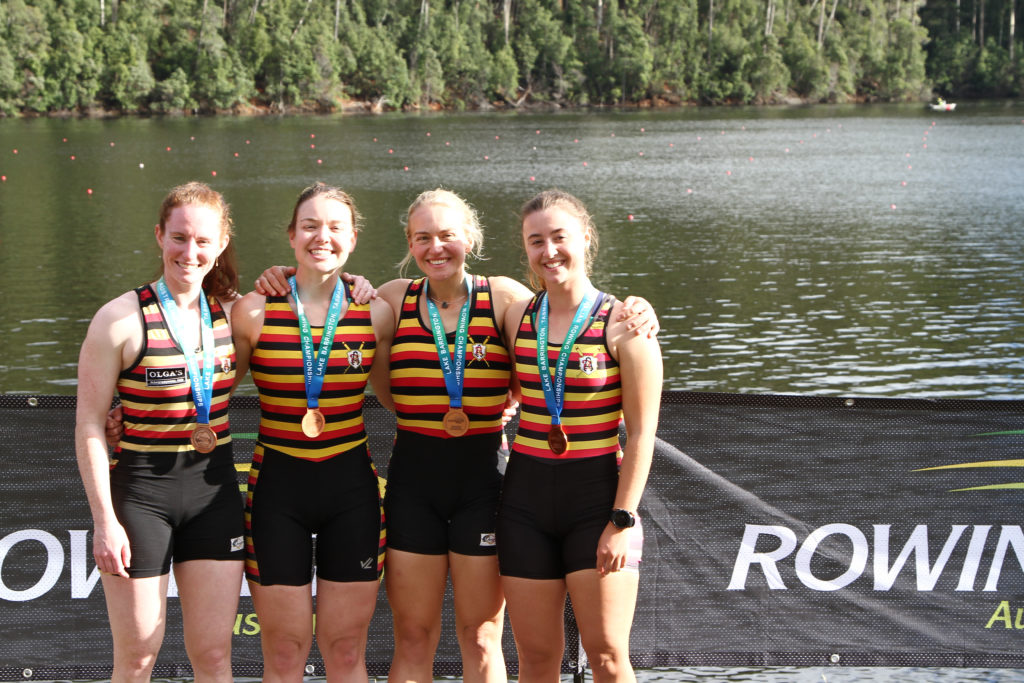 Sneaking in under the SA radar was Corio Bay Rowing Club’s Max Partington, Norwood Morialta High School Alumni (2017), who nabbed the Bronze in the Club Men’s Double in a strong field.

The AUBC boat that raced in the Club Men’s Coxless Four placed a respectable sixth in another formidable field. From the number of entries, and the standard of racing observed over the week, it appears that the Club events (where no athlete who has nominated or been selected for an Australian team can enter) have grown in strength since the last meet in 2019.

The Schoolboy Single Scull saw SA try two bites of the apple; Scotch College’s Adam Holland and Adelaide High School’s Callum Deckers lined up at the start with the last time two SA athletes had raced the final being 2018, when Unley High School’s Mitchell Reinhard won the event. It was a phenomenal battle into the increasing headwind, but Holland proved too strong – the 16-year-old sculler held consistent speed throughout the first 1500m which saw all competition fall away, and he went over the line a boatlength clear of the next sculler to claim the gold. Deckers, who was also locked in a battle for the line and continued to work his way up the field from the start, pushed for the podium finish, and pulled over the line in fourth place, securing SA’s best result in this category for quite some time. 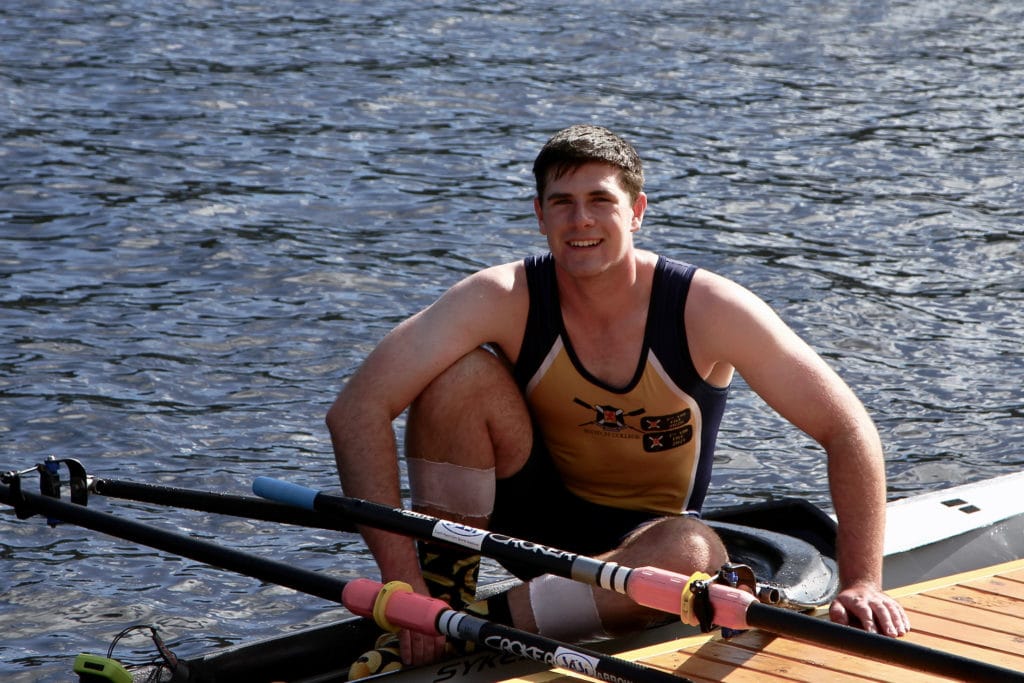 The Schoolgirl and Schoolboy coxed fours were entered by both St Peter’s Girls’ and St Peter’s College, respectively. Both crews put in tenacious performances into the headwind with the Girls’ crew coming fifth and the boy’s Collegemate’s coming seventh.

The conclusion of the School and Club racing was as dramatic as SA has seen in decades – it was the Schoolboy eights that everyone was waiting for, as earlier in the week the event saw some heart-stopping finishes as crews crossed the line with the smallest of margins in both heats and repechages. The Victorian crews held the spotlight for the week as they had fierce rivalry and tight results from their Head of the River just a week earlier; the crews in question made up half the field for the rollcall in the A-Final against our St Peter’s Boys College crew. Two New South Welsh crews and a Queensland crew were also in the lineup; Shore School (NSW) had finished second behind Kings School (not contesting the event) in their Head of the River, while Brisbane Boys (QLD) were the winners of their event also.

Coach James McRae, three-time Olympian, two-time Olympic Medalist and World Champion, has been in charge of the St Peter’s Senior Rowing Program for five years now, having taken over from Australian Olympian Sam Loch when he returned from the Rio Olympics in the 2016-17 season. The lessons McRae learned in his many, decorated years racing for the country seemed to pay off; while many schools would cancel training for poor weather out on West Lakes, the Senior Boy’s eights were often seen boating in wild weather – something that held the crew in good stead for the gusty cross-headwind that was seen for the big race.

Felix Packer, five-seat of the SA crew, said that the crew’s composure in the headwind at the start line gave the crew the edge to sit in front of the pack from the start. “There was a bit of a side-gust as the umpire called ‘Attention – row!’; our bow seat had been tapping so hard to keep us straight right up until that point, while everyone else had stopped [tapping], so we shot out straight as everyone else came out on a bit of an angle.

“We went into the 500m half a length up and it was like, ‘Oh wow – we haven’t been in this position yet!’ Then our cox, Aiden, started going pretty wild at the 750m mark and we thought, ‘Ok, right, we’ve got a chance here – this is it – we can actually win this!’” 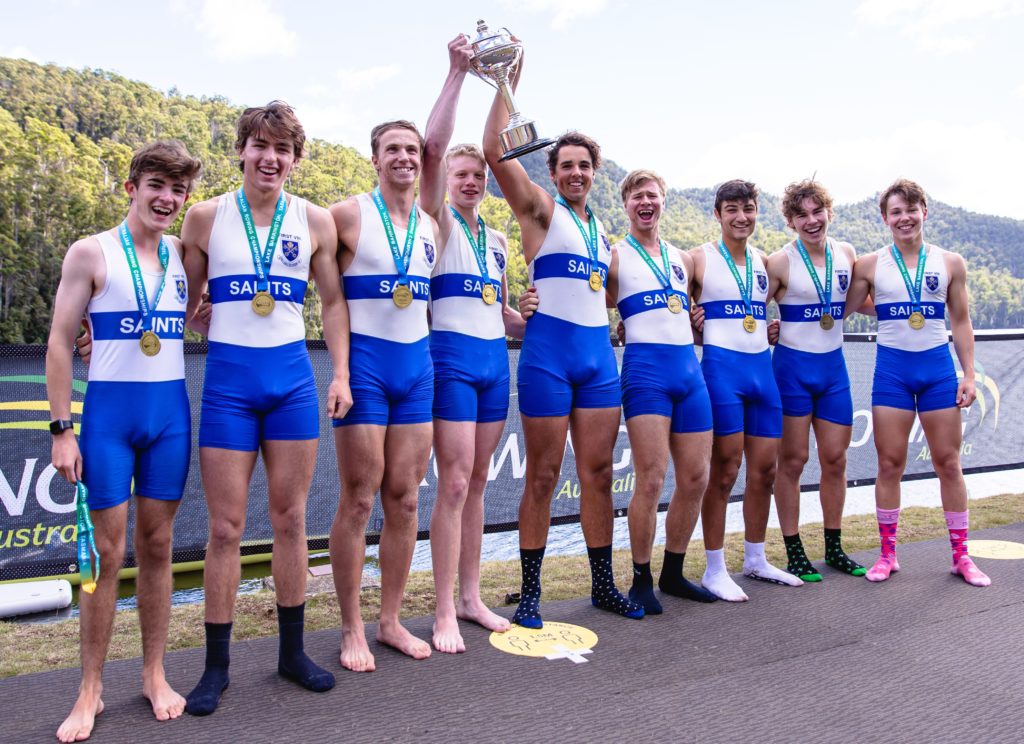 The St Peter’s College crew of Nick Burr, Edward Chipperfield, Faris Harb, Tom Oldfield, Felix Packer, Jake Nesbitt, Jeremy Beale and William Howard, coxed by Aidan Hughes, crossed the line first, 2.94 seconds ahead of NSW powerhouse Shore who took the silver, and a further 2.02 seconds back to Brisbane Boys who snapped up the bronze. The win breaks a 52-year drought for South Australian Schoolboy Eights; the last crew who won the Barrington Cup was Kings College, now Pembroke School, in 1968. The crew stepped up to receive their medals and trophy in front of a Blues-strong crowd gathered at the podium and were cheered back into their boat by fellow SA athletes in the AUBC Women’s Club eight, who raced just after the schoolboys and were waiting on the water to come into the podium to receive their bronze medals. 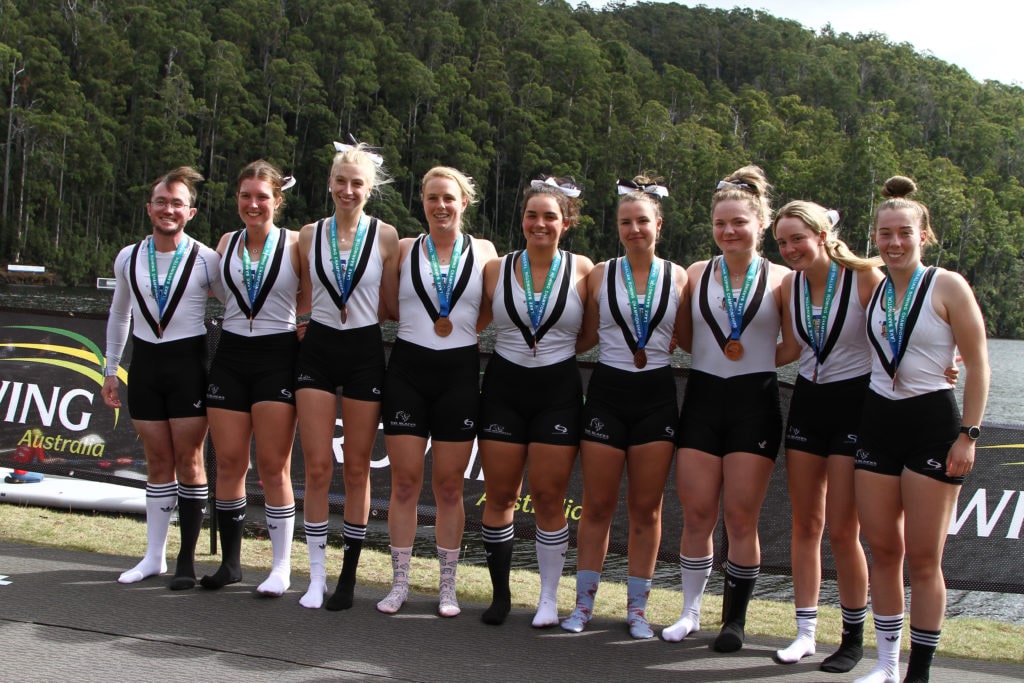 AUBC win the bronze in the Club Women’s Eight. Copyright Rowing SA (Thanks to Ann Koch)

Of the Schoolboy win, St Peter’s College Rowing Coordinator, Tim Hennessy, said that the win proves that South Australian school rowing programs are as good as anyone on the Eastern States.

“While this is great for St Peter’s, it’s great for South Australia and I hope that other Schoolboys and Schoolgirls see this as a catalyst to think big and think beyond purely the local competition.”

“St Peter’s will continue to do our best locally but keep an eye on – and target – that the final, end of the season, is the National Australian Rowing Championships.”

The interstate races were all about our scullers as Torrens Rowing Club sculler Jed Altschwager claimed his first ever national gold medal, winning the Men’s PR3 Single Scull.

Altschwager was ecstatic about his win, and talked about the headwind making things tough but said his race plan was about trusting his training. “I knew not to chase the rate, especially in the early stages – you needed to be solid while other people might make mistakes in the conditions. Rowing clean worked.

“I’ve been chasing this for about three of four years now – obviously, everything was cancelled last year because of COVID, I got gastro in 2019 and was unable to compete, so to be able to come here and show the results of my work in the single is awesome – I’m stoked!” 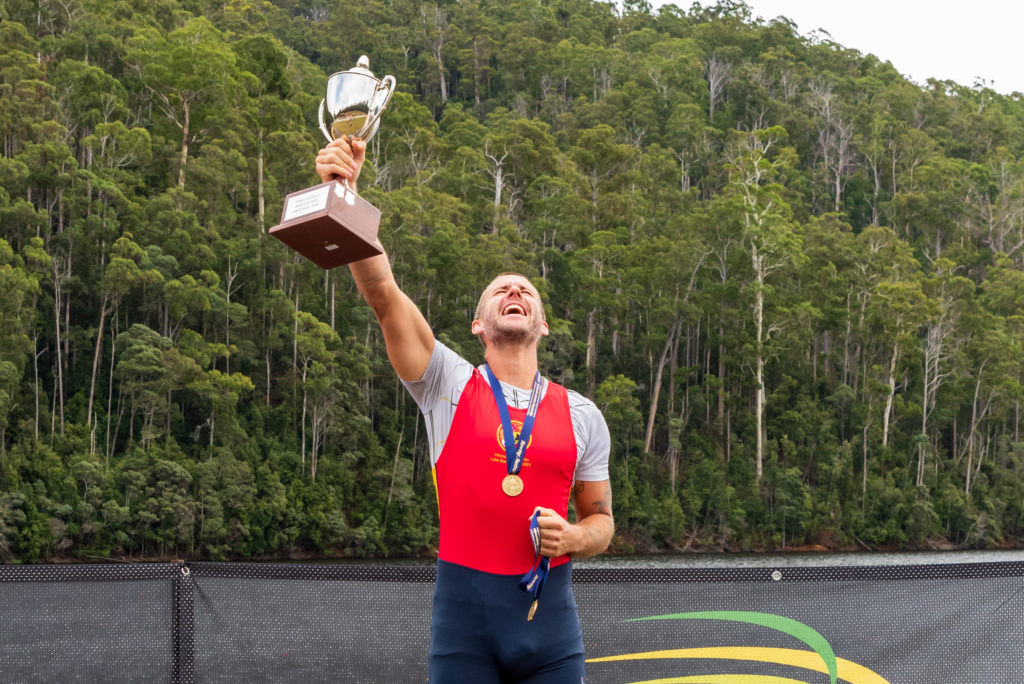 A late change in the program saw Alexander Hill (SA) step into the race for the President’s Cup to look for his third title, throwing the challenge to the winner of the Open Men’s Scull earlier this week. Cameron Girdlestone (NSW). The two pushed away from Luke Letcher (ACT) who solidly held the bronze position from start to finish. Even with Girdlestone throwing everything at him in the final stages of the race, Hill claimed his third consecutive victory in the event by only 0.73 seconds.

Though a seasoned racer, Hill said he still got nervous for this race. “It was pretty bouncy up at the start line, I’ve not done much sculling recently – and I knew I was up against really tough competition with Cam, I knew he’d push me to the last stroke – which he did. I was happy to get away with that one!” 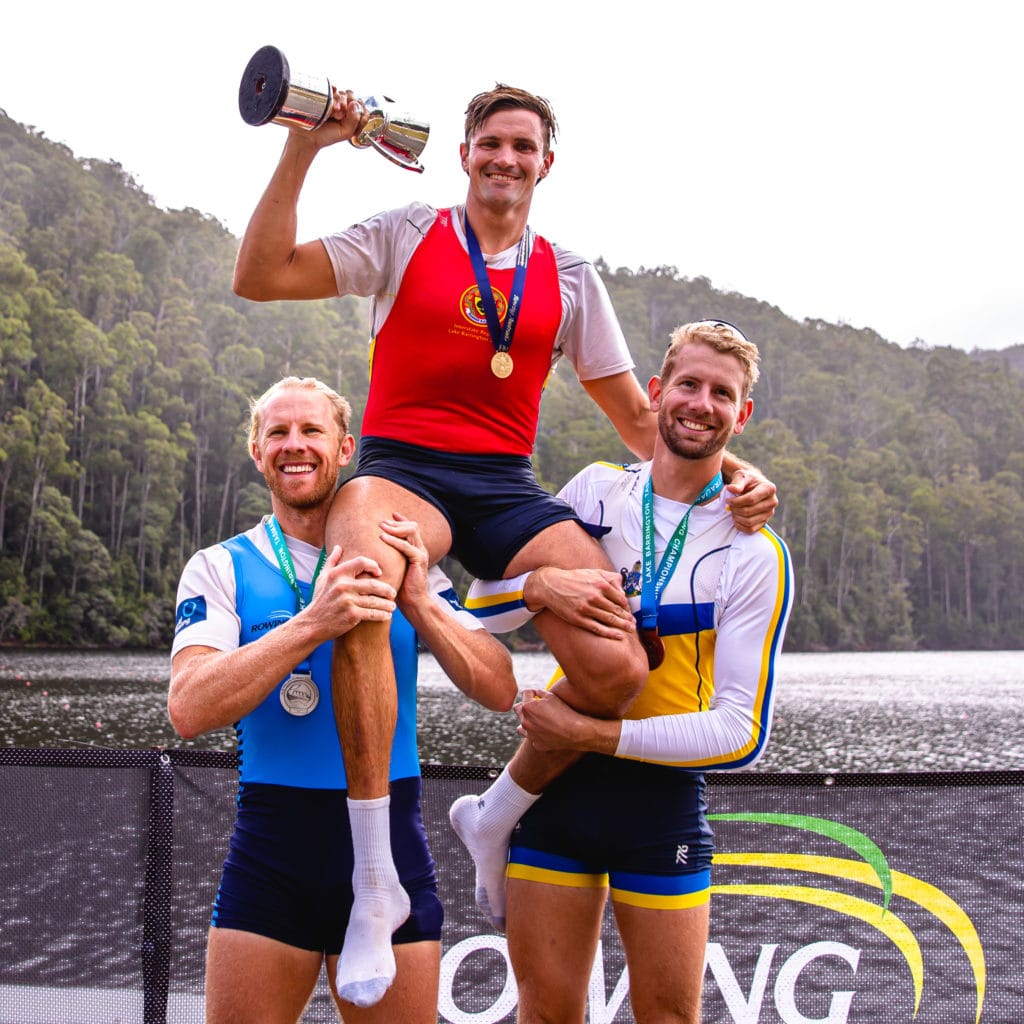 Verayna Zilm did SA proud; racing in conditions that did not favour the lightweight, Zilm put in a performance above her station and came fourth in the bid for the Nell Slatter Trophy against the heavyweight Australian Rowing Team scullers.

The Eights races saw the eastern states shine through; though the result for Noel F Wilkinson Trophy race (Youth Men) improved from the 2019 regatta, the crew placed fifth. The Bicentennial Cup (Youth Women) saw a battle between us and the home state; though the young crew tried to close the gap on the Tasmanian crew, they were pipped by 0.21 seconds in sixth place. The King’s Cup held their own without leading racer Alex Hill, with RA Olympic selection restrictions stating all potential Olympic athletes could only race one event for their state; the crew placed a respectable fifth behind boats full of NTC athletes. The Queens cup placed fourth overall, about 3 lengths clear of the Queenslander crew who claimed the bronze.

It was not only a well participated regatta in terms of athletes, but also for SA Volunteers. We would like to say a huge thank you to the following:

Of South Australia’s presence at the event, State CEO Andrew Swift said, “It was fantastic to see the spread of different clubs being represented but also achieving some great results – excitingly there are several athletes stepping up through the ranks with pleasing results; Adam Holland, the Saint’s boys, and also the Loreto girls, who won medals. That’s definitely a highlight.

“The number of SA clubs that were out there competing and proving that they were in the mix on a National Level was very pleasing to see.”