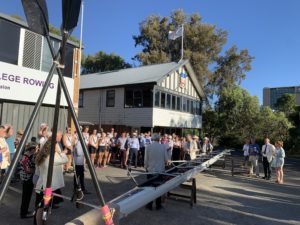 Members, friends, alumni, and athletes past and present gathered at the Adelaide University Boat Club yesterday evening to remember and honour the late Roger Moore who passed away in November last year. Roger’s rowing career began interstate, but he moved to SA in 1973 for work where he took up strong ties coaching with AUBC and local rowing schools. He served as an Australian selector in 1978-79-80 and was a Councillor and Board member of Rowing Australia between 1991-94. A more in-depth account Roger’s rowing history can be found here. 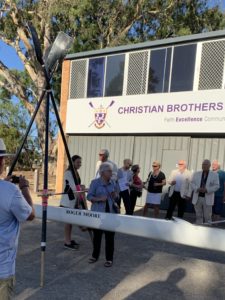 Helen Moore addresses the congregation before bursting the champagne bottle with a hammer, as is tradition when christening rowing boats.

Club Captain Alacoque Tunney opened proceedings thanking the club for the support of all present and the fundraising that allowed the club to purchase the Hudson Men’s Eight. Committee member Mike Page then said a few words to express condolences to the family and personal experiences with friend, Roger Moore. Tom Game, a previous student/mentee of Roger, read a prepared statement explaining the impact of Roger’s legacy with the club, “not a eulogy, more a celebration of who he was so we might remember him”. Game began with a kind word to Helen, Roger’s wife, “I’m so sorry that even after he is gone, you still have to attend these rowing things!” Game drew upon and relayed decades of memories and experiences from those that Roger touched with his love of rowing and mentoring young athletes. Among these were fond sayings of Rogers, his ethos in rowing, his value for sport in general, and absolute love of making a boat move well.

Wife Helen Moore was then called upon to come forward and christen the new AUBC Men’s Eight, the Roger Moore. All in attendance raised a glass of champagne to honour him, and the current AUBC men’s Squad took the boat to the water for the traditional row-past. 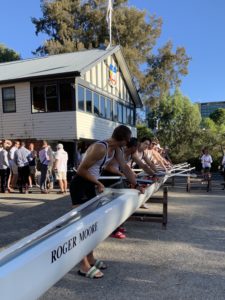 Current AUBC athletes get hands on the Roger Moore to take it for its first row after the christening.

After official proceedings, those attending broke bread together. AUBC Men’s Coach Sam Morton stated afterwards, “This is what rowing’s all about – the relationships you form. Sometimes, rowing can be a brutal sport, but it’s the impact of the relationships you have with each other that keeps you coming back. It’s great to see so many people here tonight who might have not had much to do with the club in recent years coming out of the woodwork to celebrate around the sport, and the people in the sport.”

We expect the Roger Moore to race for the first time at the Murray Bridge Regatta located at Sturt Reserve on January 30th, 2021.