What an absolute pleasure and privilege it was to be able to race and participate in the Riverland Regatta and 2nd Grade State Championships for 2020, hosted by Berri Rowing Club and supported by neighbouring Renmark Rowing Club. In a year with such a challenging climate was a fantastic relief to be able to feel a sense of normality in a familiar regatta setting – especially one that embodies so much fun and life experience, spending time with your club and crewmates over two days of racing and for most – two nights away in the country towns. The 110-event program was entered by 560 athletes – even though this number is down on last year due to the recent COVID outbreak and the uncertainty around whether the event would be allowed to go ahead, events were still well subscribed and we saw many strong competitive races with high calibre crews through the grade, masters, school and championship events.

Restrictions had eased to allow entries from interstate, and we welcomed Victorian athletes from Mildura Rowing Club and Wentworth District Rowing Club into the program; regional clubs Goolwa, Tailem Bend, Mannum and Murray Bridge Rowing Clubs were also present at the event with thanks to all major metro clubs for their support in entering. Schools Loreto College Marryatville, Prince Alfred College, Seymour College, St Peter’s College, Unley High School, Walford Anglican School and Wilderness School also attended the regatta with their youthful exuberance lifting the entire tone of the weekend.

There was something special about this year, having not run a proper, full graded regatta since February, and not allowing spectators at the events which have been held, this was an opportunity for some parents to see their children race for the first time this season, if not the first time ever. There was a real sense of “socially distanced” camaraderie on the bank with both parents and clubs, and even though the regatta was competitive, there was an unspoken “vibe” felt, where people seem to be pleased to simply be able to be there and race – the mood has seemingly shifted a little to give perspective that what we do at regattas is absolutely a privilege.

As stated, racing was competitive with the highest entered championship event the Women’s Second Grade Single Scull with 35 entrants; this was skilfully won by Loreto College Marryatville’s Victoria Binns; Binns was also in two crews that were only just beaten on the line for the Women’s Second Grade Double Scull and the Coxed Quad Scull, these races were taken out by Adelaide University Boat Club’s [AUBC] Sarah Petrov and Isobel Watson, who were joined by Cleo Wilson, Sophie Radford and cox Amy Carrodus for the larger boat. Aside from the single, AUBC made a clean sweep of the women’s Second Grade events winning the Coxless Pair, Coxed Four and Eight events with convincing margins ahead of strong school and club entries.

The Men’s Championship events were slightly more spread, with 2nd Grade Men’s Double Scull taken out by St Peter’s College’s Nick Burr and Jeremy Beale ahead of the Torrens Rowing Club [TRC] crew, and Prince Alfred College taking out first and second spot in the Coxless pair, the crew of Angus Shute and Thomas Saunders taking the victory over their crewmates. Burr and Beale teamed up with St Peter’s College schoolmates Edward Chipperfield, Jake Nesbitt and cox Patrick Murray to take out the 2nd Grade Men’s Coxed Quad ahead of TRC again, showing a very competitive school program run by 2-time Olympian and now Schoolboy Coach, James McRae. The Men’s Single Scull championship was taken out by Adelaide Rowing Club’s Ethan Mons in an interesting final featuring a rogue houseboat forcing all crews to alter course – after discussion with the athletes and Umpires who gave them the option to re-row the race all athletes agreed to let the results stand. The Second Grade Men’s Coxed Four was convincingly won by a TRC crew of Thomas Cook, Joshua Felderhof, Angus Shute, Oliver Deere and cox Mitch Parker, while AUBC took out the Eight, holding their own against a strong young crew from Torrens Rowing Club, 2.75 seconds the margin between first and second.

The Open categories were also raced well with some tight races in both men’s and women’s categories; experienced Adelaide Rowing Club [ARC] rower Drew Clements was pushed to the line by young TRC sculler Sam Button in the Open Men’s Single, with the Women’s event taken out by ARC’s Mieka Webb. Clements teamed up with James Price to dominate the Double Scull; the Open Women’s Double was a much closer race, as AUBC’s crew of Taleala McCarthy and Yours Truly had a horrible start by dropping an oar, yet managed to row themselves back in the race and sprint to the line, crossing first in front of the ARC crew of Anna Collins and Mieka Webb by only 0.89 seconds. The Open Women’s Quad and Eight was also won by AUBC over ARC, however the more experienced sweepers at ARC took out the more technical smaller sweep boats, winning the Open Women’s Pair and Four by convincing margins.

The Open Men’s crew races were all hotly contended, and most were won by the smallest of margins: the Quad Scull was taken out by TRC over ARC with a margin of 1.43 seconds; the Pair was raced hammer and tong between AUBC crew Oscar Moore and Ross Hamilton and TRC/AUBC crew Thomas Johnson [TRC] and Nick Blackman [AUBC] the entire way down the course with the composite crew just holding on to their lead at the line with a margin of 1.02 seconds; the Men’s Four was anyone’s race with TRC, ARC and AUBC all in contact to the line for great spectator viewing, with ARC’s experience proving the victor coming from behind to cross in front of TRC who was 0.65 second behind, and 1.17 seconds back to the AUBC crew in third.

My personal highlight of the regatta had to be the Open Men’s Eight; I had not seen a hit out like this in this event in many years. Not since James McRae and Jed Altschwager jumped in the boat with well drilled St Peters College rowers have ARC been threatened in this category, yet the AUBC and ARC were locked in a dash for the line, changing leads in the final hundreds of metres of the Murray River course. Vicky Knight, BRO, who umpired the event said, “It was clear by the 1000m mark who the leaders were, and you could see them building off each other as they raced side by side. I told my driver to navigate to sit just behind and between them to ensure they didn’t clash oars, and both crews took the final turn well – there was no sinister moves by the coxswains, both held their lines and you could see eyes looking at each other out of the boat to see where they were as they pushed up to the line – it was just good, honest racing, trying to get ahead of one another. What a race! I’m so glad I was able to follow it.” The final result saw ARC take the win over the AUBC crew by a canvas, 0.21 seconds the margin.

Honours in the Schoolboys and Schoolgirls Eights went to St Peter’s Boys and Seymour College respectively, with the Schoolboy and Schoolgirl Year 9/10 A Quads being won by Prince Alfred College and Wilderness School respectively. Mildura took a win in the Masters Men’s Double, Port Adelaide again dominated in the Women’s Masters sculling events, and Wentworth took out a win in the Mixed Masters Double Division 2.

It was phenomenal to see such a spread of results across the attending clubs, showing strength and competition within the divisions. Again thanks to Berri Rowing Club for hosting, with support of Renmark Rowing club – we look forward to the Riverland Regatta again in Renmark next year. Thanks to the sponsors of the Riverland Regatta and Second Grade State Championships listed below who keep these events alive. Thanks to the BROs and Volunteers who make these events happen. The next full regatta for Masters, Grade and Schools is set for the 30th of January 2021, which will coincide with the opening of the new rowing facility and Murray Bridge Rowing Club clubrooms at Murray Bridge on Sturt Reserve. 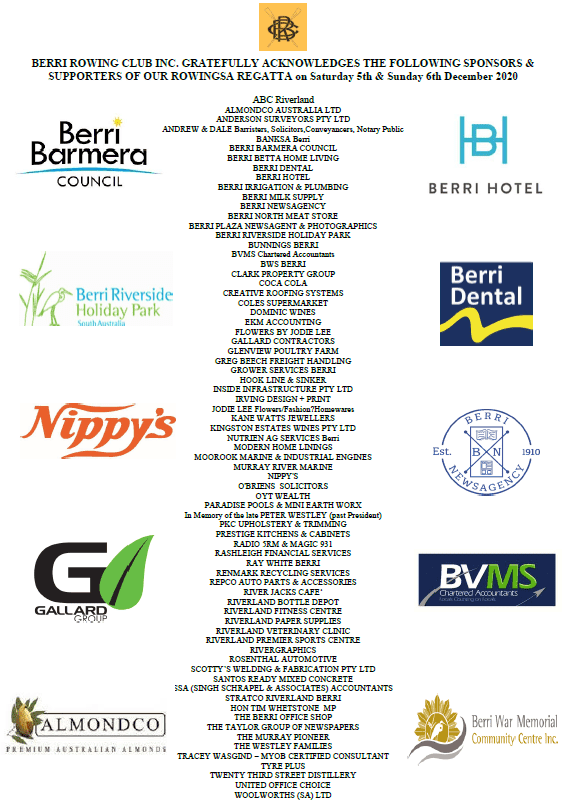