Following the pinnacle event of the 2019 World Rowing circuit, high-level athletes get the opportunity to travel, relax and have some down time. Lucky for us, we have had a visitor on holiday from across the Tasman – Samantha Voss rowed in the New Zealand Women’s Quad that qualified for the 2020 Tokyo Olympics and sat down with Rowing SA this morning for a chat about her experience at the World Championships.

Voss was in the NZ Under 23 team in 2018 where she won the Women’s Single Scull U23 World Champion title. 2019 was her first time rowing on the Open World stage; selected for the “spare” double (reserve), Voss was simply pleased to have made the team and wanted to take it all in and learn as much as possible from the heavily experienced and well decorated New Zealand Senior Rowing Team. Training with and supporting the team on the European World Rowing Circuit, Voss had the opportunity to race the Open Women’s single scull in World Cup II, impressively racing to a very close second in the B Final.

At the conclusion of World Cup III, the selectors told the sweep and sculling reserves that they were not going to re-trial any of the existing combinations for the upcoming World Championships, meaning no opportunity for Voss to race in these boats.

“There was this ‘BUT’ at the end of that sentence, and the selectors told us they were going to combine the reserves into a quad which was really exciting. We went from not racing at all to racing a quad at the World Championships!”

The NZ Women’s quad has not raced since it missed out on qualification for Rio in 2015. With the introduction of the Women’s Four into the Olympic Games, the traditionally highly competitive sculling boat class did not see as many entries through this world cup season.

“The High-Performance staff (of Rowing NZ) were like, ‘Just see what happens!’ The way our crew looked at it was – we didn’t have time to muck it up. We had to make the most of the opportunity we were given and not overthink things.

We didn’t know what the racing would be like for us; we just needed to go out there and do it – with the women’s quad having not raced for so long there was no pressure, we could just go race, have fun and enjoy it. It made it that much easier to do the work – there were no complications.” 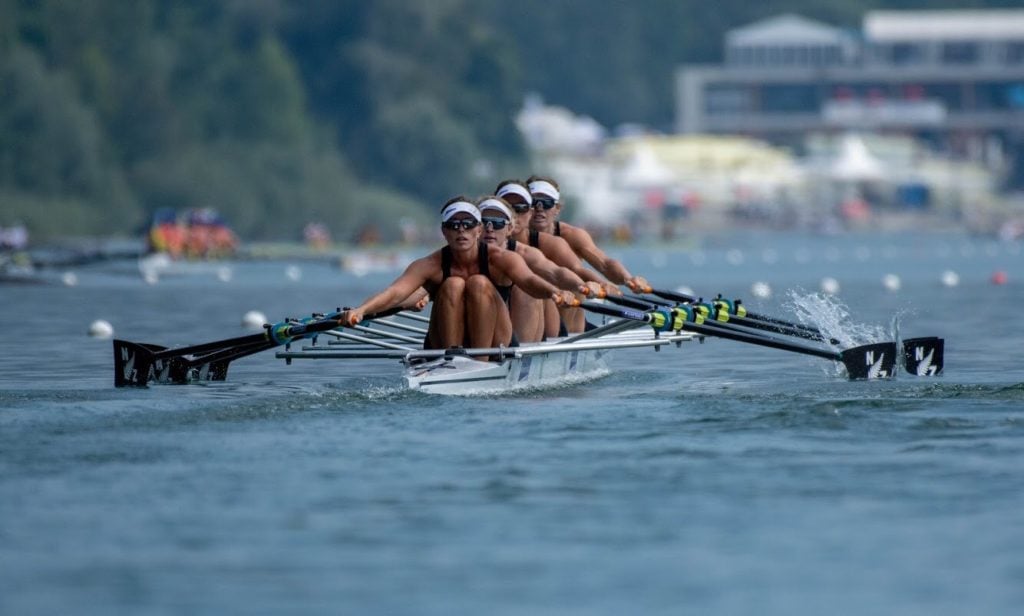 Though the last time Voss rowed a quad was in 2015 for the U23 team, the crew worked well together and secured that all-important boat qualification position, coming fifth in the A-Final. The team for the NZ Summer National Training Centre will be released in a few weeks and Voss hopes to be named. Though she’s enjoying a holiday at the moment, she says that Tokyo 2020 is the goal.

“We have about 3 weeks just to do our own thing– keep fit obviously but have a bit of down time now. West Lakes is really pretty! I loved my paddle yesterday, and it’s nice to have some familiar faces around – I know some of these guys from Trans-Tasman and U23’s last year.

Once I get back home, we’ll have to re-trial for all those seats that have just become available for the Olympics. It helps that there’s four more seats available!”