Penrith buzzed with athletes, volunteers, umpires and supporters in the last week of March. The 2019 Aon Sydney International Rowing Regatta had arrived, and as the Centenary of the King’s Cup, this National meet took on special significance. South Australia had a contingent of school and club athletes compete at the event, and we saw our National Training Centre athletes don their home club colours as well as the red, navy and yellow of SA, and race thrilling and competitive combinations with the country’s best. Overall, the highlight of the week had to be the blue-riband event where South Australia managed to put in an excellent performance and podium alongside New South Wales and Victoria, obtaining the bronze medal in the King’s Cup. The crew,  featuring two SA State of Origin athletes who live interstate (Alex Hill at the NTC and Nathan Bowden in Sydney) has not been able to regularly train together but still gelled well with Kane Grant of the 2018 U23 Australian Rowing Team (ARTeam), Jack Kelly who was in the 2018 Open ARTeam, Jack Deans, Tim Santin, Angus Dawson and James Price, coxed by Indran Mukherjee and coached by James Hammond and Daren Potts. The boat trained with reserve Thomas Doornbos and with thanks to James McRae or Jed Altschwager who both jumped in when needed.

It would be remiss not to acknowledge the exceptional performance of Alex Hill, who, barely an hour before the Eights raced, won the Presidents Cup. This is the second year in a row Hill won the title, making him the first South Australian in history to with the Cup twice. This, along with his national titles, international titles and an extraordinary ability to excel in both sculling and sweep makes Hill arguably one of the best rowers SA has seen. 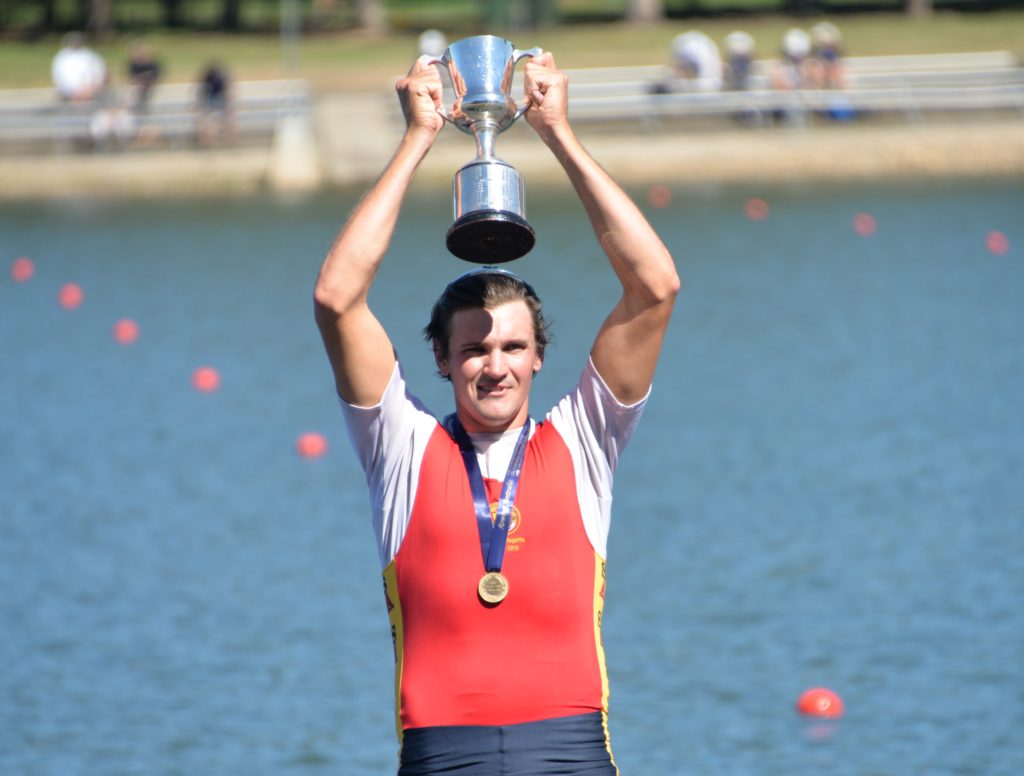 Hill holds the Presidents Cup above his head for the second time in as many years. (Image Copyright RowingSA/HEBFOTOS)

Earlier in the week, we had some of SA’s best compete in the small boats. Hill showed his prowess in the Open Men’s single scull once again to win the event in a very quick time of 6:46.32. Later in the week, Hill teamed up in a full South Australian crew of Nathan Bowden (SRC) Angus Dawson (ARC) and James McRae (MBRC) to race the Open Men’s Coxless four on the Friday. Though this may seem like an all-star cast, the crews in the race were stacked with current NTC athletes and very promising combinations. The SA boys did not disappoint however, they put on a show for the spectators by jumping out fast from the starting blocks and staying very much in contact with the field. After slipping back to fourth position through the halfway point, the crew stepped up and pushed into third place; they looked like they may have been gunning for the silver however could not catch the Mercantile Composite-NTC crew and claimed the bronze medal.

The female SA athletes were firing as well; Molly Goodman and Olympia Aldersey raced in both the Open Women’s double and pair. Against a full contingent of nine NTC boat classes, the combination of Goodman with Sarah Hawe (Huon) and Aldersey with Katrina Werry (Mercantile) went silver and bronze respectively in what was a very close and exciting race.

The doubles saw some interesting combinations, Molly teamed up with current Australian double athlete Genevieve Horton (SUBC) and Olympia rowed behind Lightweight Sarah Pound (UTS). The final was a very quick and exciting race, with the Goodman/Horton combination took the silver with the Pound/Aldersey crew only 0.44 behind for the bronze. Oly then posted this (very cute) photo to Instagram with the caption “half the weight and double the rate”: 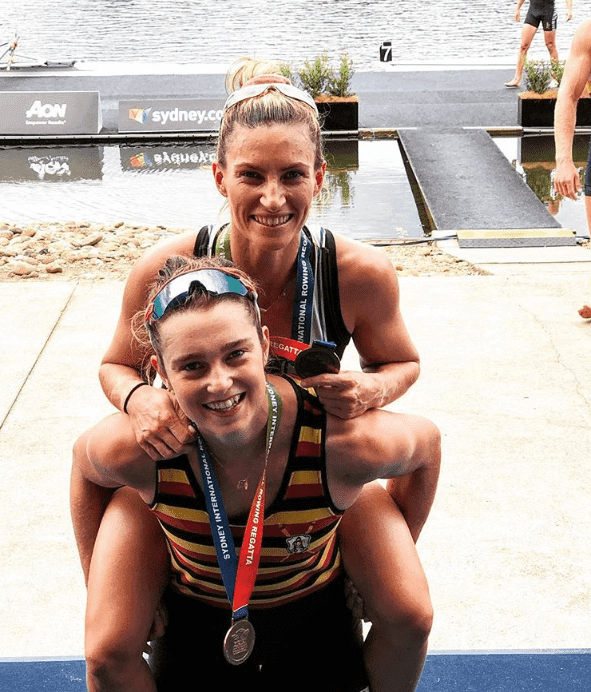 Of note, Christie Shanahan (ARC) and Joanne Malcolm (Phoenix) also qualified for the final of the Open Women’s double scull yet had to withdraw due to injury.

The two NTC girls rowed in the same boat for the Open Women’s Eight in a crew which was made up exclusively of NTC athletes. With the pressure on, the race was made even more interesting when a blustery headwind rolled in, slowing times and creating chaos across the board. The Adelaide Rowing Club composite crew showed dominance in the race, winning in a time of 7:08.20 – extremely slow for a crew of such calibre which showed just how impactful the conditions were. Another Adelaide Rowing club composite crew of Katelyn Nicholson (ARC), Gill Crowe (ARC), Joanne Malcolm (Phoenix), Mieka Webb (ARC), Anna Collins (ARC), Sophia Nery (ARC), Symonne Wickman (PARC), Verayna Zilm (ARC) coxed by Alannah Gilsmore (ARC) and coached by Tory Toogood raced in the OW8+ final. The crew had a great race for the minor positions and came out ahead of a predominantly Queenslander crew.

Oscar McGuinness had a successful week, claiming the gold in the U23 lightweight men’s double scull and silver in the Open Lightweight Men’s quadruple scull in a composite crew combined with athletes from other states. McGuinness raced well in the single scull, winning the bronze in the U23 Lightweight event. 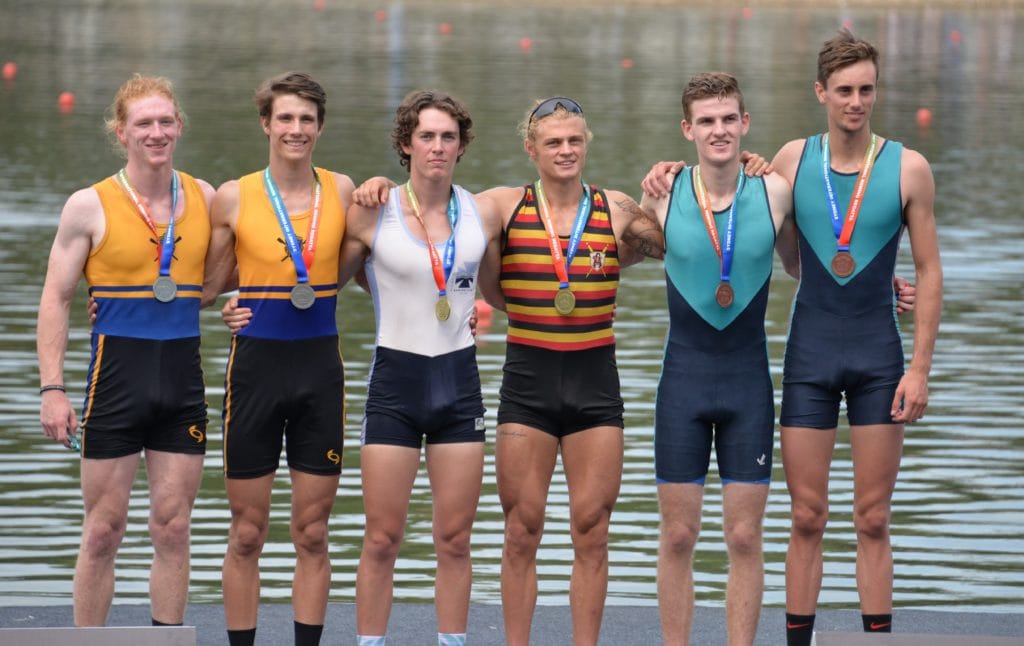 SA athletes Max Partington (CORIO), Harrison Francis (AUBC) and Lachlan Kirchner (AUBC) also raced the event, however having raced the 4- barely an hour earlier, the crew seemed slightly off the pace for this event.

Lachlan Kirchner and Harrison Francis (AUBC) put in a great effort in the U21 Men’s double; the two lightweights held their own in the heavyweight division placing sixth overall.

Celia Cowan (AUBC) had a successful week, she teamed up with Toowong athlete Lucy Theodore in the U23 Lightweight double scull to win the silver for the event, a mere 1.07 seconds behind the race-winners. The two winning boats teamed up to race the quadruple scull in the same boat class and unsurprisingly dominated the event with a convincing win. Cowan also raced the U23 Lightweight women’s single scull, and place fifth in the A final. 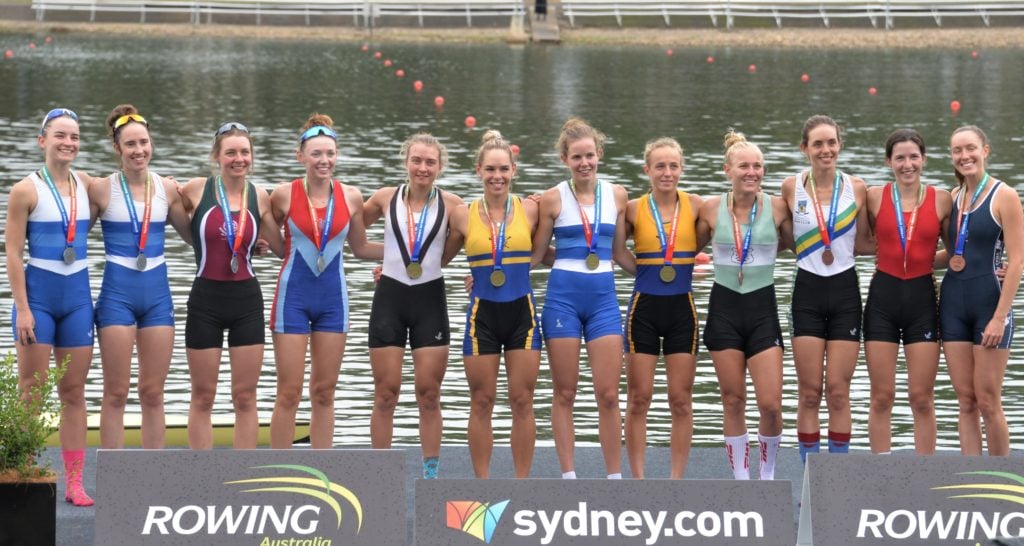 Kane Grant (ARC) slotted nicely into a Mercantile Composite crew Saturday morning for the U23M8+ A Final, in a very fast final the scratch crew worked together to secure the bronze just 0.60 seconds in front of the Sydney-NSWIS crew boat.

Finals of the Club division proved fruitful for Adelaide Rowing Club, the squad claimed the gold in the Men’s double with James Price and Tim Santin taking the title; the women also had a great race in the coxless four with Anna Collins, Gill Crowe, Mieka Webb and Aine Seed who took the silver.

The U19 division of the single scull is always very competitive, with scullers in this division often pushing to make Junior Australian teams. Men’s Youth 8+ teammates Nick Blackman and James Andrewartha were both in the A final of the U19 men’s single and had an almighty push for the line in a fantastic spectacle. The two finished within a second of the bronze position in one of the best finishes seen all week, Andrewartha fourth by 0.90 seconds and Blackman fifth by 0.09 seconds. Max Linton also entered the event and raced the B final to finish fifth.

Blackman then went on to race the Schoolboy single scull, where he progressed through to the final and came away with the bronze in another sprint for the line. The fast-finishing sculler was in fifth place with only 500m to go yet pushed up through the scullers to claim the bronze, only 0.42 seconds away from the silver.

Newcomer to the sport Anu Francis has gone from strength to strength. She raced the PR3 Women’s Single scull final on the Thursday and came away with the silver, narrowly beating the experienced Julia Story of New South Wales, and impressively knocking off 35 seconds from her personal best in the event. In the interstate regatta, the wind blew up again, and this time the more experienced Story handled the conditions better and came out on top, with Francis claiming the bronze. With this as Anu’s first National regatta and only been in the sport for six months, we watch her progression with keen interest. Torrens athlete Jed Altschwager had an impressive row on the Thursday in the PR3 Men’s Single Scull; he took the silver only 2.76 seconds behind James Talbot in an impressive time of 7:33.57. He and ARTeam member William Smith from Adelaide University Boat Club had a fantastic row in the PR3 Men’s Pair against highly ranked and well drilled Australian Rowing Team athletes Ben Gibson and James Talbot; the two boats stayed within a canvas of each other for the majority of the race. However in the final 500m Gibson and Talbot proved too strong and stepped away from the South Australian pair and came away with the win.

On Saturday the PR3 Mixed Coxed 4+ raced Will Smith, winner of the PR3 Women’s Single and current ARTeam member Nikki Ayers, Rio Paralympian Davinia Lefroy, Kevin Wall stepped in for unwell Altschwager. The crew did well even with the late change, winning the silver medal.

School racing is always competitive at Nationals and this year was no different. Top three placegetters at SA Schools Head of the River Scotch College, Seymour College and Walford Anglican School entered their eights into the Schoolgirl Eight division, yet it was third-place crew Walford who proved more skilful in the rough conditions Saturday and qualified to the A Final while Scotch and Seymour raced the B final. The crew finished 8th in the A Final.

The Schoolboy eights had hot competition this year with several schools clocking well under six minutes in favourable conditions. However, the semi-finals were held in a breezy headwind, slowing crews by an average of a minute across the board. St Peter’s College entered their Head of the River-winning 1st VIII combination to the event and managed to qualify for the A final, however they were outclassed by the Eastern state schools who dominated the podium, the boys finished a respectable 7th overall – to make an A final at Nationals is an achievement in itself. Scotch College Adelaide also entered the division and came third in the C final.

Other notable results of the week include:

The athletes could not put in such great performances without their support team of coaches, parents, friends and family. Thanks to all who made the trip across to cheer on our SA athletes or who have put in hours at home helping these young men and women strive for their best. To all who entered, congratulations on your efforts. A special mention goes to Brett Ralph, Mark Mussared and Vicki Knight for taking the time off to travel and volunteer at the event. Vicki also had a successful week, achieving her Rowing Australia Level 3 Umpire’s accreditation. More to come on her achievement!